A Guinea for Your Thoughts Guinea Fowl.  Such strange, whimsical, and curious creatures with a name that lends itself to amusing plays on words-- like the title above or 'begin the beguinea'- hee, hee.  Their spirits and intelligence are quite different from my other poultry; more feral, more loquacious, and more unpredictable.  While some may think they are rather dim, I prefer not to refer to other creatures as stupid.  Species other than humans have an appropriate intelligence that we often fail to grasp or appreciate.  Considering the havoc we have wreaked on our earth, I think it is supremely shortsighted as well as egotistic of humans to think we are intellectually superior. 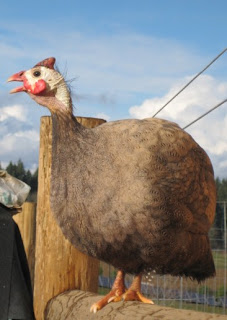 Why do I keep these crazy beasts?  My ambition is to provide guinea flocks to vineyard properties for pest control.  They eat all kinds of pests including ticks.  Additionally, guineas are incredibly entertaining to watch and have been excellent aerial predator deterrents.  They make me think of a group of old men with hunched backs; wearing cardigan sweaters with pantaloons hiked to above their waist.  When traveling over the landscape, their movements as a flock are fluid and synchronous, like a school of fish.  They yammer, they sing, and they scream at a deafening level if they spy a hawk.  A Redtail Hawk recently landed on a nearby pine tree, ambitiously taking stock of the poultry run.  When I came to investigate the focus of the shrieking guineas, the hawk appeared disgusted and promptly flew off.  His cover was completely blown by these alert, LOUD birds.  They are definitely not appropriate for urban flock keeping.  They have a song for greeting the sun and one for its daily retirement.  They have egg laying songs, greeting flock members songs, talking about the humans they see songs, and alert songs.  Beyond vocalizing, they seem to enjoy playing the fence, creating a "thuong" sound by plucking the wires of the fencing material with their beaks.  Thankfully, our neighbours are as enchanted with the guinea "ambience" as we are. 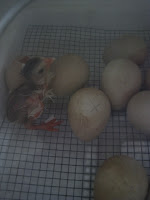 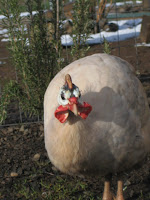 My original flock hatched from fertile eggs that I got off eBay.  (Yes, you can buy hatching eggs on eBay!) Their eggs are extremely pointy; soft shades of buff to khaki with incredibly hard shells.  The yolks are a truly saturated bright orange.  I originally hatched 16 from 18 eggs, but 2 keets (baby guineas) never developed to be particularly strong and sadly faded away as teenagers.  Beyond those two, the reminder are incredibly robust and one of the best hatches of birds I have ever had.  (I find them to be far more disease resistant and weather hardy than chickens.)  On hatching day, I came home to find what was evocative of a 'Jiffy Pop', with keets popping out of their eggs like popcorn in the incubator!  This flock includes a mix of rare plumage colours- Buff Dundotte, Brown, Slate, and Lavender.  We have had a few hatchlings this year from these birds.  Their bright apricot coloured legs and beaks are adorable.  As adults, their large, dark eyes fringed with long lashes and the wiry hairs on the backs of their naked necks hold definite appeal and add to their comedic, slapdash looking appearance. 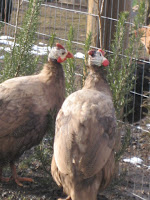 Our flock spent their introduction to outdoors in an extremely large parrot cage to imprint on our large poultry pen.  After inhabiting this for a week, they were released to spend their days roaming the run and within just a couple of days, returned themselves to the cage at night.  Once they starting learning to put their wings to use,  they drove us rather crazy since often all but one guinea would depart from the run, with the other 13 would running back and forth along the outside of the pen distressed that one of their flock members was still inside.  This caused considerable damage to our fledgling rosemary hedge and made them pretty unpopular with its creator, Thomas.  It took many weeks for them the develop enough confidence to disperse into smaller groups or individually and not neurotically try to all remain together every second of the day. 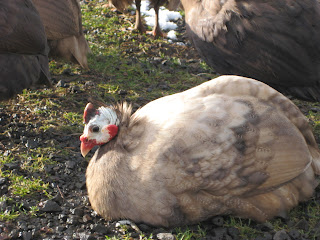 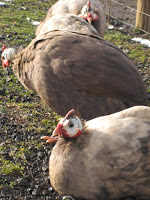 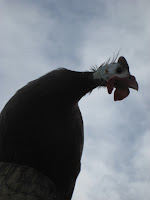 Guinea Fowl originate from Africa.  They are used for food, eggs, and for plumage.  They also are featured in African folk tales as well as Greek mythology.  These birds bring me a lot of joy and are a privilege to keep.  I hope if you are a farmsteader or ever become one that you have a chance to live with Guinea Fowl. 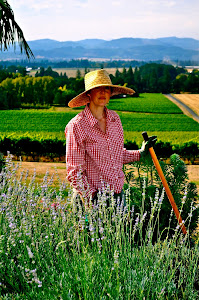